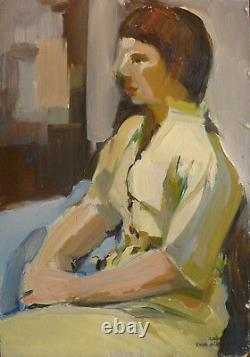 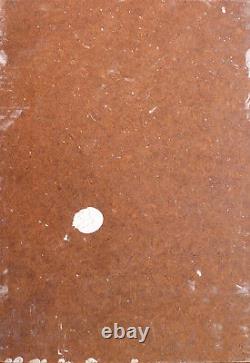 Stamp workshop on lower right. 18.8" x 7.5" in. Yvonne dewals, a Belgian artist, was active in the 1940s-50s. Painter of portraits and nudes, his style combines spontaneity and speed in the touch that gives him this particular style that pulls towards erasure.

As if the portraits were slightly veiled or in a very fine mist. There is in his work a real freshness and an expressionist touch, sometimes close in the impression of speed that emerges from his brush stroke of the great German master lovis corinth. Painter of portraits and nudes, his style combines spontaneity and speed in the key that gives this particular style that pulls delete. As if the portraits were lightly warped or in a very fine mist.

Surviving until the advent of the Nazi regime, expressionism was condemned by the regime, which considered it "degenerate". Expressionism is the projection of a subjectivity that tends to distort reality in order to inspire the viewer an emotional reaction.

The representations are often based on anxious visions, distorting and stylizing reality to achieve the greatest expressive intensity. These are a reflection of the pessimistic vision that expressionists have of their time, haunted by the threat of the First World War. Expressionist works often stage symbols, influenced by incipient psychoanalysis and the search for symbolism.

At the beginning of the 20th century, this movement deeply rooted in northern Europe (especially Germany) was a reaction to French impressionism. While Impressionism is still to describe physical reality, German expressionism no longer attaches itself to this reality and subjects it to the artist's states of soul. Expressionism also breaks with impressionism through a very aggressive form: violent colors, sharp lines. It is then part of the continuity of the fauvism that is beginning to exhaust and whose main representatives are moving more or less abruptly away: matisse, marquet, van dongen, braque, derain, friez and vlaminck. Yet expressionism is not really a movement or a school but rather a reaction against academicism and society. Expressionist artists will often remain isolated.'the cry of the painter edvard Munch, or the war of otto ten are the most representative paintings of the expressionist genre. The painters of the xve and xvie centuries matthias grünewald and the Greek can be linked to the expressionist tendency, but in practice the term applies mainly to works of the 20th century.

The first warning elements of expressionism appear at the end of the 19th century, especially in the canvas of edvard Munch, the cry as well as in the evolution of the works of van Gogh. The critique dart wilhelm worringer, in 1908, was the first to speak of "expressionism". Expressionism is also spreading as photographic technique perfects and the relationship between art and reality is profoundly altered.

The pictorial art loses its function as a privileged means of reproduction of objective reality, which reinforces its subjective component and allows it to gradually free itself from norms. Edward Munch's madonna, 1894. Several artistic groups can be linked to expressionism, such as the association of Munich artists (nkvm) and the new secession of berlin from which came by break, respectively der blaue reiter (the blue rider) and die brücke (the bridge).

In 1918, the November group crystallised its political significance. After 1933, the movement, in its formal dimension, influenced many other artists, such as abstract expressionists in the United States. Die brücke (the bridge) die brücke was founded in 1905 by ernst ludwig kirchner, friez bleyl, erich heckel and karl schmidt-rottluff in dresde. Max pechstein and Emil node in 1906, otto müller in 1910, and cuno amiet join them.

The Fauvist van Dongen also joined them and was the intermediary with his French companions. The group's intention was to attract any revolutionary element that wished to unite with them, so they lexprimed in a letter addressed to nolde. Their greatest interest was to destroy the old conventions, which were identical to what was happening in france. According to kirchner, they could not impose rules and inspiration should flow free and give immediate expression to the emotional pressures of the artist; they were less concerned with the formal aspects, a position that separated them from the fauvism of matisse and braque. With very brutal and bloody scenes for the Germans, the content is more important than the form. The burden of social criticism which they imposed on them led them to criticize the conservatives who accused them of being a danger to German youth. Kirchner was considered the most authentic representative of die brücke. He was a hypersensitive artist who painted the streets and urban life of Berlin in a new and original way. Its sharp and sharp forms, with acidic colours, are characteristic, in works such as the 1914 dance school. Emil nolde, even if he left the group at the end of 1907, was also considered one of the most important representatives of the group. Influenced by the Belgian ensor and van Gogh, he felt strongly attracted by black primitivism and the myth of the wild. His search for paradise focused more on the concretion of the primordial than on escapist attitudes, shaping his tragic feeling of nature and his inspiration of psychological and instinctive character, elements that made him an expressionist painter par excellence. Around 1909, after a serious illness, he began painting paintings with a religious theme, in which he expressed his mystical inspiration. Edvard Munch although not bound with die brücke is considered the father of expressionism. He was Norwegian and, until 1885, became interested in impressionism and symbolism. From 1892 his style was fully formed, sinuous curves, arbitrary colors, obsession with linfirmity and death, disturbing beings fleeing from a mass of color, as one observes in his most famous painting, the Cree. His stay in Germany until 1908 explains his influence within die brücke. In 1913 the group was dissolved, as a result of the obvious differences between the group's components and the establishment of a market which for them complicated the requirements of a common front. In 1912, another group of artists including Wassily Kandinsky, Franz Marc, August Macke, Alexei Jawlensky, Gabriele Münter and Marianne von Werefkin gathered in Murnau, next to munch under the name of der blaue Reiter (the blue rider). Unlike die brücke, the artists of der blaue reiter felt the need to create a more controlled language to promote their messages. They published books and organized exhibitions. They developed a spiritual art in which they reduced naturalism to the point of abstraction. They shared some ideas with the expressionists of die brücke but they had a greater purification of instincts and they also wanted to capture the spiritual essence of reality. On this point, their ideas were more sought after and speculative.

The greatest representatives were Kandinsky and Franz Marc, accompanied by Macke, Jawlensky and Klee. Kandinsky, from Moscow, arrived in munch in 1896. In 1909 he was appointed president of the new association of munich artists and organized the exhibitions of 1909 and 1910 to present the work of the Fauvists and the first cubists.

In the catalogue produced during the second exhibition, he began to introduce his theory of art, which ended two years later when his book of the spiritual was published in art. In 1912, after giving his resignation from the association, he founded with franz marc der blaue reiter. This name derives from Kandinsky's love for riders and from that of franz marc for horses. The group dispersed with the war at which jacke and marc died. The first two exhibitions of der blaue reiter showed graphic works and drawings.

In 1913, they will be invited to participate in an international berlin exhibition called the Berlin Autumn Salon. His poetics were defined as a lyrical expressionism in which escape did not tend to the wild world. But towards the spirituality of nature and the inner world. For Kandinsky, the painting had to extend from there.

Weighing material reality up to the abstraction of pure vision, with color as. Medium, hence the development of a complex theory of color. In painting as pure art, book of 1913, he maintains that painting is already a separate reality, a world in itself, a new form of being, which acts on the viewer through sight and which causes deep spiritual experiences in him. Previously, in 1910, Kandinsky had realized the first abstract watercolours.

For klee, the artist had to mix with the forces of nature and act as a medium so that his creations would be accepted in the same way that natural phenomena were accepted. Unlike Kandinsky, klee was convinced that art could capture the creative sense of nature and that is why it rejected absolute abstraction. In concrete terms, klee allowed himself to be influenced at first, as a jacke, by the simultaneism of the delaunay. At the same time, he was the first artist to enter the fields of unconsciousness as Freud and Jung began to study them. After the dissolution of the group in 1919, walter gropius founded the Bauhaus in Weimar, a school of drawing and architecture, whose teachers were the greatest masters of constructive expressionism, and which brought together men like feininger, klee or kandinsky.

In Germany, after the First World War, expressionist realism appeared, a movement in which artists separated themselves from abstraction, reflecting on figurative art and rejecting any activity that did not deal with the problems of the urgent reality of the post-war period. This movement regrouped otto ten, george grosz, max beckmann and the sculptor barlach.

The seller is "www.Galerie-d.Art" and is located in/en betting. This item can be shipped to the following countries: america, europe, asia, australia.