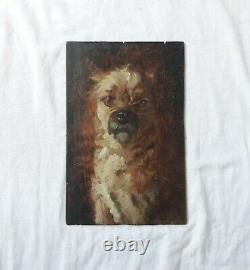 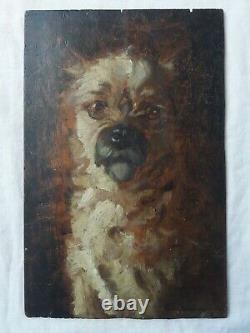 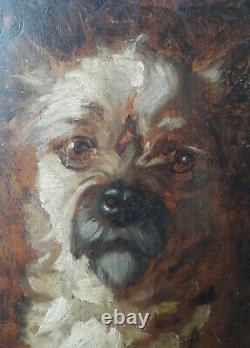 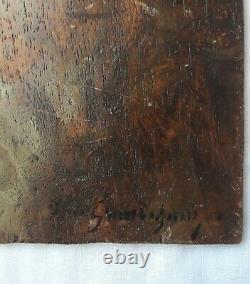 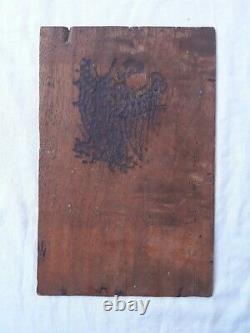 This dog shows a touching personality, reinforced by a clear obscur treated by the artist by means of painting in reserve. Interesting detail: the lightning eagle marked with iron on the back of the panel. Symbol of Bonaparte napoleon and taken up by napoleon iii, it is here an imperial eagle of the second empire but the mystery remains whole...

Origin of a family close to Napoleonic power? Dimensions: 31 x 21 cm. Condition: small traces on the surface, a scratch on the right eye of the dog, possibly to restore. Stunning portrait of a dog by french artist victor de grandchamp.

Painted around 1850 during the second empire era. Oil on wood panel, signed bottom right. Victor de grandchamp, born in 1832, was specialized in portraiture. This work is a rare portrait of a sitting dog, the close-up position allowing the artist to acutely depict the face expression of the animal.

This dog has a vibrating personality, yet the artist thing to use a minimalist technique called "painting in direct reserve". It means that the artist only used brushtrokes to paint the white parts. With this technique, victor de grandchamp let some spots simply blank - the colors of the wood panel - for stronger contrasts, also called chiaroscuro. Another interesting thing is the ironed mark on the back of the panel. It depicts an imperial eagle, symbol of the French empire of Napoleon Bonaparte and Napoleon the third.

Looking at the birthday of victor de grandchamp, this eagle is linked to the second empire but the mystery is kept... Perhaps this painting was in a collection of an aristocratic family, close to Napoleon government. Size: 12.2 x 8.2 inches.

The seller is "salonsloan" and is located at/in bets. This item can be shipped to the following countries: European Union, Switzerland.