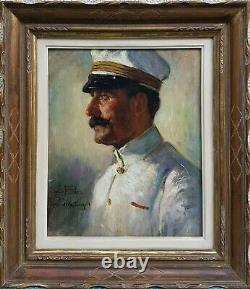 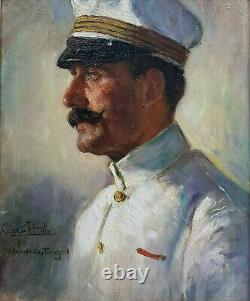 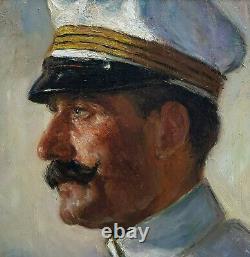 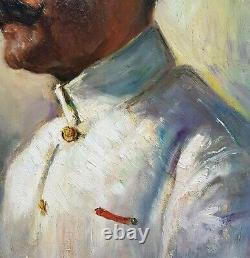 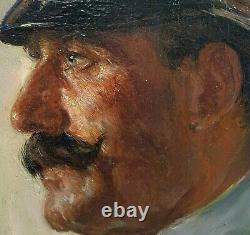 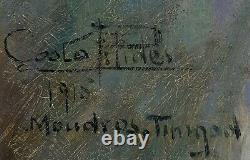 Beautiful sculpted wooden montparnasse frame. Born in poti in georgy (russia), pilides costa called "tino costa" is a travelling painter. He spent his youth in France and during World War I he served in the French army.

It was there that he was able to paint this beautiful portrait of the commander of the timgad ship in 1915. Costa then immigrated to the United States in 1929, where he continued to paint portraits of celebrities, including Jean Harlow.

And in 1936, his portrait of Governor Merriam was even bought by the state of california. It is still in the capitol of the state.

Costa is one of these artists of Russian origin immigrants in California in the 1920s. In 1915 in the battle of the dardanelles the commander of the timgad was the captain in the long course joseph blancart.

He was a naval lieutenant and one of the most famous sailors of the transatlantic general company. In 1917 he became the commander of the Niagara steamer, which was worth two official testimonies of satisfaction and a summons to the order of the army. A reserve officer in the Royal, in 1927 he became the first commander of the Ile de France ship and was able to transform the discipline on board and carry out the transfer of the soldier to the civilian, assisted by his second, etienne payen de la garanderie, future commander of the bets and normandie. The timgad was a Transatlantic General Company liner put into service in November 1911 on the northern african lines, departing from Marseille. In 1914, he was requisitioned and armed as an auxiliary cruiser of first rank until August 1915.

Based in mondros in grace he participated in the battle of the dardanelles. It was requisitioned again in 1916 for the transport of troops to the east, especially for the operations of athenes at the end of 1916-early 1917 and between itea and tarente in the spring of 1918. It was withdrawn on July 16, 1920. This item is in the category "art, antiques\art of xxe, contemporary\paintings". The seller is "galeriedequel" and is located in this country: en.

This item can be shipped to the following country: whole world.