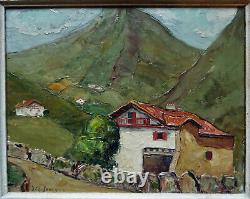 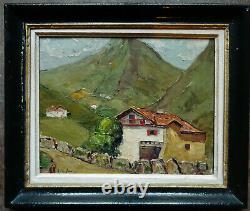 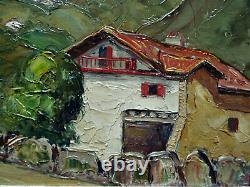 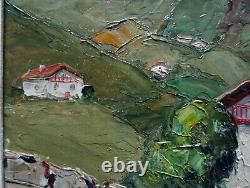 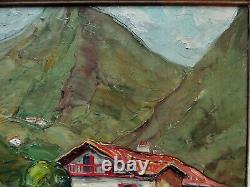 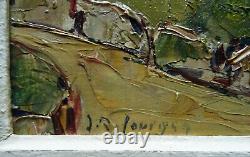 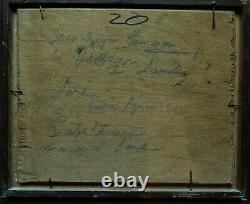 Very nice small oil / panel jean roger Sourgen signed lower left and titled + on the back of the painter's hand \Format without frame 19x24cm. This is indeed a very interesting composition jean roger Sourgen, very powerful by his touch raised the knife, and by its more subtle palette with these shades of caramel, melted green, white and gray that just brightened the intense red of the woodwork so emblematic farmhouses. A real little masterpiece made on the ground in minutes with this excellent painter autoditacte Landes I no longer as its reputation is well established. In Sourgen effect was moors, and we see him more often lakes and pines surrounding hossegor as views of the basque country where he came still in neighbor asked her easel, mostly to paint mountains, ball or bullfights. Associate of French artists, his works were repeatedly purchased by the state.

He also made several trips to North Africa where he will return to souveureuses Orientalists animated scenes mostly very many characters. Sourgen had several distinct periods, including a very influenced by Nabis, also close to some symbolists such Brunet, neighbor bordeaux or Osbert. Knight of the Legion of Honor in 1935. Sourgen is now one of the most famous painters Landes with alex Lizal. A catalog was even dedicated to him and it appears in other works.

The panel I propose is in perfect condition, delivered in an old black lacquered wand. The item \enamels \The seller is \This article can be shipped worldwide.
oldportraittoiletcenturysignedpaintingmarinetoiletableausignorientalist19thspinbarbizonnatureimpressionistwithwoodpicturepaintnineteenthtablelandscapehow tounderbeautifulpanelschoolflowersoilwomanboardantiqueframescene