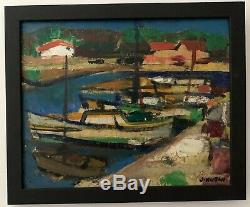 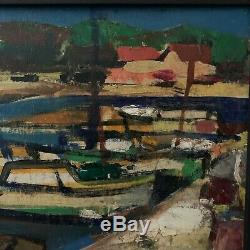 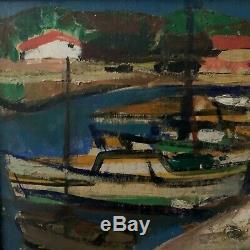 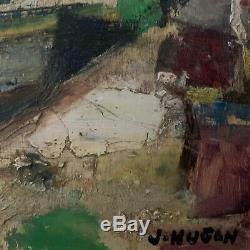 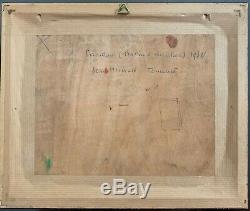 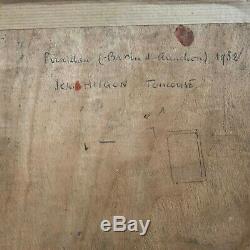 The Bordelais know and appreciate this artist born in 1919 in Marseille, but Bordeaux adoption. From 1938 to 1950, its landscapes, figures, still lifes are ringed with black lines and play a minimum of subtle color tones that recall the manner of b. He made his first exhibition in October 1946 in Toulouse in the gallery chappe Lautier.

Spontaneously fawn in his early works, his painting is dense and rich in materials and colors. François desnoyer allows him to advance and enter the world of painters Toulouse. It integrates the \his work is recognized, impressed critics by the generosity of his palette.

It exposes in 1951 with van de Velde, ambrogiani the International Biennial of France painting chin and is awarded for a canvas hailed for its \He arrived in Bordeaux in 1953, this sparkling after war when the city experienced an artistic revival. He finds painters with whom he exhibited in Toulouse: Labégorre, Carrère, vallet that the guide in the Bordeaux microcosm. It falls to independent Aquitaine in 1970. Anguish of sincere and spontaneous autoditacte who have not made the \In 1980, he moved away from figuration seems it may be easy to go to the limits of abstraction and achieve complete mastery of his art. At the height of its exuberance, the last ten years become the beautiful singing of a liberated expression.

His painting is a translation of a moment, a feeling, one vote. Without departing from the bright colors of his early work, continuing tawny, it continues to evolve and produced what he calls \Apparition of intense blue, deep green.

He acquired around 1985, a totally free practice, invented a new color universe as a perfect world. Much appreciated for his human qualities, his great capacity for work and his incessant research by his painter friends such as Belaubre, Boissonnet, calgani, bouilly, vallet, pistre, Teyssandier he exhibited with them in the gallery of the river, a must in the world local art. He died in 1990, leaving his sky an unfinished work.

You have to read the fine richly illustrated book published in 2007 by Editions has jean michel by hugon pétuaud-pond, commented poetically illustrations by christian jean says cazaux preface by Dominique Dussol. Thank you to observe the pictures to make you a better idea.