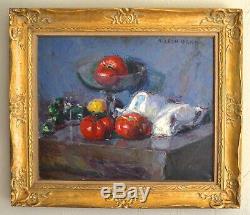 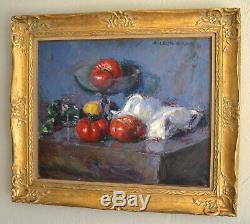 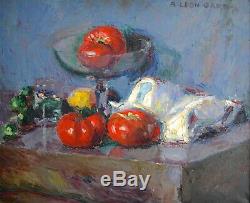 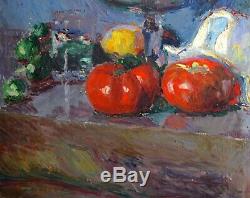 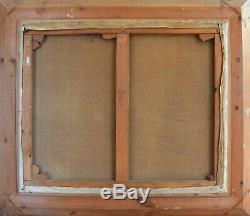 Provenance: family of the artist. Light work of the painter Leon Gard representing a still life with tomatoes on a table.

From 1926 to 1932, the painter Léon gard made several stays Toulon and painted female nudes and still lifes decorated with fruits and vegetables from the region, with warm colors and intense. Born in Tulle Corrèze, family gard will settle a decade later morigny near etampes then in Paris.

From age 12, leon gard shows his artistic leanings realizing his charcoal portrait. At 16, he copied old paintings for a play \He receives encouragement from the state and is proposed as an associate of the autumn fair the following year. In 1922 he entered the National School of Fine Arts of Paris, in the studio of painter Ernest laurent but poorly supporting the theories of his teachers and the atmosphere in the school, he signed a contract with the art dealer georges chéron exposing Soutine, foujita and van dongen.

His friend and patron, Louis Metman, museum director of Decorative Arts, then awarded him a pension so he could paint at Toulon. The economic crisis of 1931 requires the painter to find a job in a restoration workshop of paintings which he became the boss. He continues in parallel to send their works to the Salon national and exposing including the carpenter and bernheim gallery in Paris. Through his job, he became friends with Sacha guitry. Which he made the portrait and buy him several paintings for his personal collection.

In 1946 founded the magazine gard leon apollo and then began a crusade against art non-figurative painting. To leave the tumult of Paris, the artist from making repeated visits to the castle of the dolls in the forest isle adam and take pleasure in representing the fellows of the park according to the vagaries of weather and seasons. Leon Gard is a great colourist sattachant to represent what he sees with accuracy in compositions where he sometimes expresses his love of precise contour, retail, the weight of things; other times, in a broader way, it sabandonne his love of atmosphere and colorful vibrations; Finally, he tried on a few occasions to merge these two almost irreconcilable problems in one in one piece. For more information about the artist, we can refer to the website dedicated to the painter: leongard. Dimensions: 73 x 60 cm frameless and 94 x 81 cm with its montparnasse frame gilded.

For more information, contact us. The seller is \This item can be shipped to the following countries: america, europe, asia, australia.
landscapeboardhow toflowerstoiletbarbizonoilbeautifulframeunderpanelpaintportraitwith19thspinimpressionistantiqueoldtableschoolmarinepaintingtableausignpicturewomancenturywoodnatureorientalistsignedscenetoilenineteenth