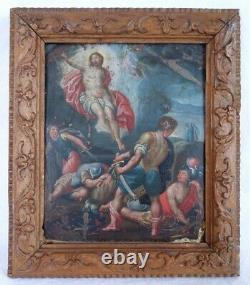 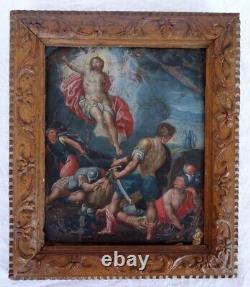 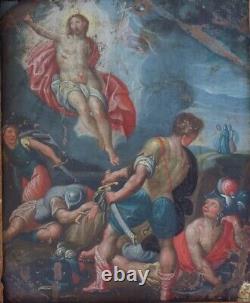 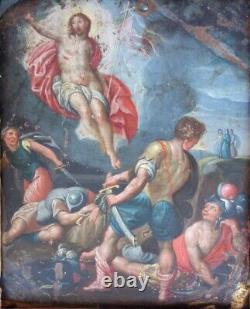 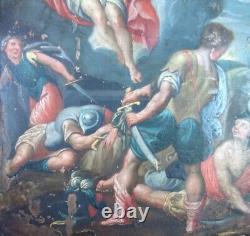 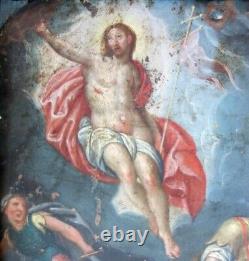 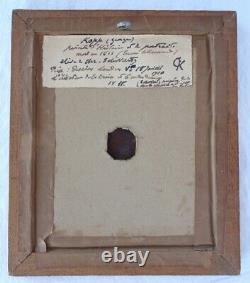 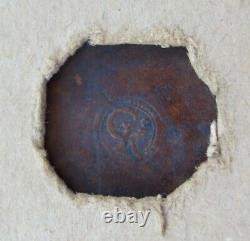 Oil on copper representing the resurrection of Christ coming out of his tomb in glory; in the foreground one distinguishes the Roman legionaries charged with the guard of the tomb. In the background we see the holy women coming to visit the tomb in the morning of Easter. The Catholic Church retains for their identity the canonical list of brides (wives of cleophas), salome marries (female of zebedee) and marie-madeleine. Oil on copper of the late 20th century or any early 20th century. The Roman legionaries are still dressed in the fashion of the rebirth in effect under henri iv. The painting is presented in a finely carved wooden frame of holy lucia of period louis xiv. The copper bears on the back the monogram stamped gk, signature of georges kopp. It would be a German or Alsatian painter who realized essentially religious subjects at the very beginning of the 19th century.

The handwritten record on the back of the work indicates that Kopp would have been a schwarz student, but at this stage we could not find any more information. The frame illustrates the virtuosity achieved by some of the artists from the Netherlands who specialized in wood carving and made crucifixes, but also boxes of different shapes, frames, candlesticks and all kinds of objects.

The wood used has a tight grain and a color drawing on the red; it is a variety of cherry trees from the forest of sampigny-en-barrois, now destroyed and dependent on a convent that gave its name to the wood. While caesar bagard, and then his son coughing, were the leaders of this school, today it seems incorrect or abusive to systematically attribute to them the paternity of all the objects made in this wood. Thus, in a document dated 1751, the Benedictine monk dom calmed down, abbot of Senones, notes that "many small objects are made of holy lucie wood in Lorraine and are exported to foreign countries. This work occupied many workers and many other workshops in nancy specialized in crucifixes and other objects in cherry: Charles chassel, claude des indes, jean-françois lupot, françois manruisse and Jean-baptiste vallier, active in nancy at the end of the xvii and at the beginning of the 18th century are all mentioned as sculptors of wood of holy lucia. It was necessary to replace all objects of devotion or toilet accessories, such as crucifixes, mirrors and various boxes which, from now on, could no longer be made of gold or silver.

The tabletiers of nancy exploited the situation to their advantage to make various items of wood of Saint Lucia by taking over the decorative repertoire of goldsmiths. Less fragile than lacquer, the wood of holy lucie lends itself especially to delicate shearing.

Good general condition, some wear on the pictorial layer and copper in the bottom right corner. The painting seems to have been exhibited initially suspended by a nail whose hole is seen at the top, then presented in this pretty frame 300 years ago or about 100 years after being made by georges kopp. Frame : 21cm x 18,4cm panel : 15,5cm x 13cm.

The painting is set into a bagard wood fine scultped frame, louis xiv period. Frame : 21cm x 18.4cm panel : 15.5cm x 13cm. Kopp Resurrection painting of Christ, oil on copper, frame wood ste lucia" is on sale since Friday 3 December 2021. It is in the category "art, antiques\art of xixe and before\paintings, enamels". The seller is "gslr-antiques" and is located in/in grenoble.

Unit quantity: 1 Authenticity: original put on sale by the artist