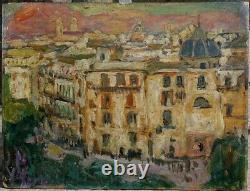 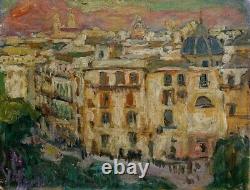 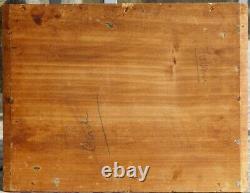 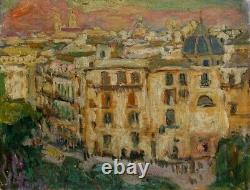 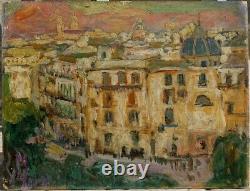 Oil on wood, 35cm x 27cm, signed at the bottom in the centre allard the olive tree - titled on the back: palermo. Pupil in engraving at the academy of touring and lithography in Brussels in his father's workshop. Perfected in Paris from 1901, at the Julian Academy at w. Exhibits in Paris in 1910 with independents and in 1912 with French artists. Price of the hainaut (1912).

Is responsible for the decoration execution for the Antwerp Colonial Exhibition in 1894 and for the Antwerp World's Fair, at the Belgian Congo Palace, in 1930. Part of the artistic section at the front during the First World War. Takes many trips to Europe and the countries of North Africa (Algeria and Tunisia).

Travel to the congo in 1928 and 1933, but accidentally disappears into the congo river. In 1929, the mirror of the Belgian congo was illustrated.

Mural painting at the people's house in quaregnon (1921-22) and at the communal house of jemappes (1924). Works at the museums of Brussels (army museum), the louvière and tour. Artist listed at the benezit, arto and piron (with examples of signature). Side artprice, artnet, mayer, akoun...

554 results from 500 euro to 82,000 euro!! sold with a certificate of authenticity. Beautiful post-impressionist painting of Belgian school from the beginning of the 20th century, executed in 1923 , representing a view of palermo, Sicily, Italy.

The biography of allard the olive tree and other works indicate the presence of the painter in palermo in 1923. This wooden panel is in excellent condition 100% original. The paint, never cleaned and a little dirty, is in perfect condition 100% original, neither repainted nor repaired of any kind. Strictly nothing comes out to the lamp u. This table is in excellent state 100% original! Authentic out of the attic! Never seen on the market! Sold with a certificate of authenticity. Hand-hand at the welcome store!!

Payments accepted: pay pal, bank transfer, cheque. Immediate mailing from France or Belgium has received the regulations! Oil on wood, 35cm x 27cm, signed down on the center allard l'olivier - titled on the back: palerme. Pupil in engraving to the academy of tour and in lithography in brussels in his father's studio.

Perfects in paris from 1901, in the academy julian to w. Exhibit in paris in 1910 with the independents and in 1912 with the french artists. Is charged with the execution of decoration for the colonial exhibition of antwerp in 1894 and for the world fair of antwerp, to the palace of Belgian congo, in 1930. Been a part of the artistic section in the front during the 1st world war. Begins numerous journeys in Europe and in the countries of north africa (algeria and tunisia). Journey in congo in 1928 and in 1933, but disappears accidentally in the river congo. Illustrious in 1929 the mirror of belgian congo. Mural at the house of the people to quaregnon (1921-22) and to the municipal house of jemappes (1924). Works in the museums of brussels (museum of the army), louvière and tour.

489 results from1000 euro to 82000 euro!! beautiful flemish school painting early of the 20th century, executed in 1904 , representing. A view of palermo, sicily, italy. The biography of allard l'olivier and other works indicated the painter's presence in palermo in 1923. This wood panel is in very good condition 100% from origin.

Just come out of a attic, first time on the market! Don't hesitate to ask me for high-definition photos! My paintings are accompanied by an invoice with the value of a certificate of authenticity written by me. Entirely handwritten, it accurately describes the painting, certifying its author, period and authenticity. This writing has a European legal value of 10 years.

I take responsibility for everything I sell, my 100% positive estimates are there to testify! The item \"fernand allard the olive tree, 1923, palermo, benezit, big odds! Superb\" has been on sale since Wednesday, March 31, 2021.

It is in the category \"art, antiques-art of the 19th century and avant-paintings, enamels\". The seller is \"web-antic-broadcast\" and is located in mouscron. This item can be delivered anywhere in the world.