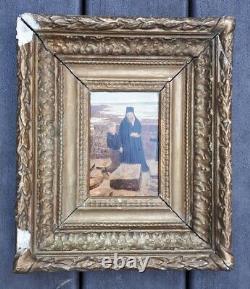 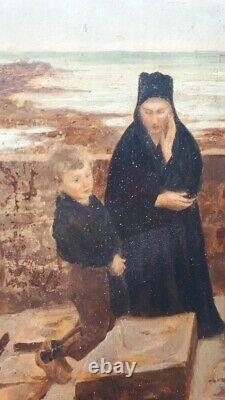 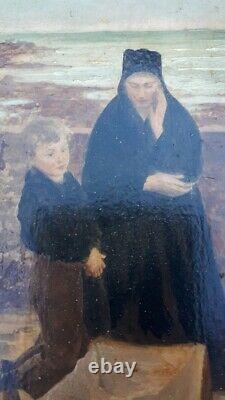 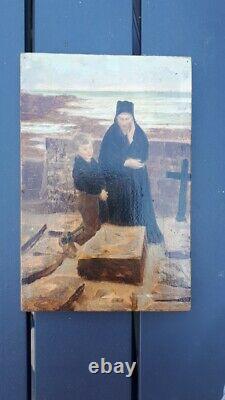 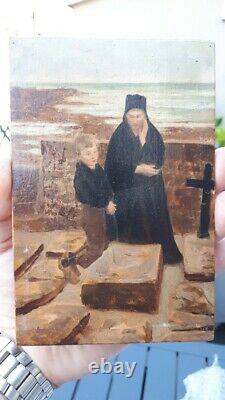 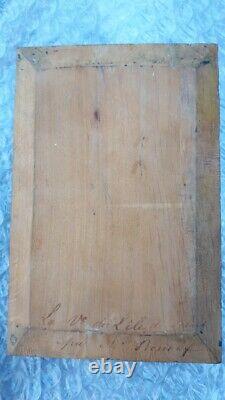 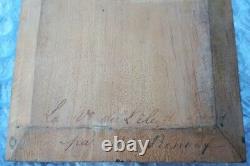 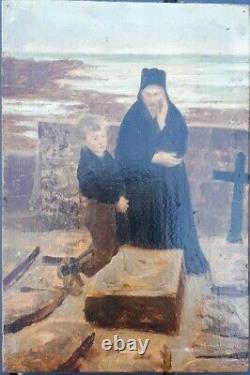 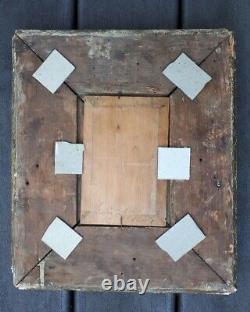 The sign's not signed. It is exhibited in the museum of fine arts of quimper, the same painting but of a completely different format. Oil on canvas - purchased from the artist in 1880 - h. Renouf spent his childhood in Normandie à Honfleur and drew very early on the pattern.

After an apprenticeship in the Parisian baker's and lefèvre's workshops, he began to exhibit in 1873. His painting, the object of numerous preparatory studies, is marked by a special care in the rendering of the details and the correctness of the attitudes of the characters. Renouf has known Bretagne since 1876 and finds inspiration for genre scenes. During an entire winter spent in the middle of the population of the fishermen of the breast island, the painter imbued himself with the unique atmosphere of this bare and austere island, located in a hostile sea, off the edge of the raz. Fishing around the island, nicknamed the island of the trepasses, is particularly dangerous and frequent shipwrecks, hence the large number of widows of fishermen, recognizable by their black suit.

These widows occupy a separate place and do not remarry. This work, presented at the Paris show in 1880, brings fame to its author and is immediately acquired by the Musée des beaux-arts de quimper. She represents a fisherman's widow and her son collecting on the grave of the husband and father who disappeared at sea. This widow wears the broad black cap that symbolizes more than any other Breton pain. The cemetery is barely protected by a stone wall that appears derisory in front of a threatening sea when the elements are unleashed. Renouf chose as his model a young woman and a child on the island and had them laid in the abandoned cemetery along the coast as a frame for his painting. He studied at the imperial high school of Bonaparte renowned in 1870, lycée condorcet. He had as his comrade jacinthe pozier. The Pozier family will then be a great help and an unwavering friendship. After classical studies he returned to the Julian academy.

And was the student of gustave baker. Of a pleasant character, he quickly sympathizes with students and teachers. Féru of classical music, admirers of beethoven, gluck, mozart he went in the company of his friends almost every Sunday to applaud the works at the concerts pasdeloup. He exhibited his first works at the exhibition of painting and sculpture. Bets between 1877 and 1881.

He received the gold medal at the universal exhibition of 1889. "strong constitution, carved like a true sea wolf, a bearded blond who holds the brush as well as the rowing; with this a true poet, who loves nature and spends his time in the midst of the harsh population of the sea workers, which does not prevent him from also seeking his impressions elsewhere. He painted marine and peasant themes, often Bretons, especially after a stay on the island of bosom.

As his Parisian workshop was in a dreadful state, he had a new workshop built in the harbour where he died. His works are found in museums in france à amiens. And the metropolitan museum of art. "The widow [makes him the widow of the island of bosom] of Mr. Renouf is an excellent picture.

The unfortunate one, dressed in long mourning clothing, stands on his knees in front of the grave where lies the loved one who has taken away from him the ruthless ocean that rumbles behind her. Next to the orphan stands: his young thought is not absorbed by this dark idea of death; it floats, distracts, in his childish gaze. The feeling, which is intense and envelops the whole canvas, compensates for the inexperience of the execution too wide. But what is at the highest point remarkable is the effect of this distant sea reflecting the white and sparkling light of the sky.

There is something to make many landscapers envious of. He is buried in the Holy Husband Cemetery.

It is in the category "art, antiques\art of xixe and before\paintings, enamels". The seller is "kernonen75" and is located in/in Vincennes. This item can be delivered anywhere in the world.