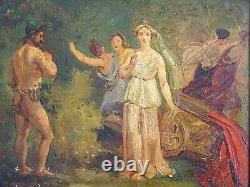 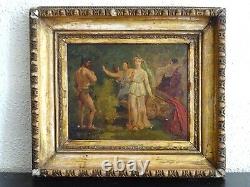 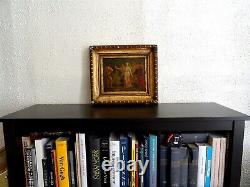 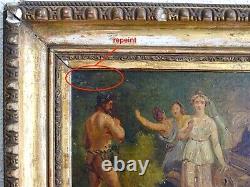 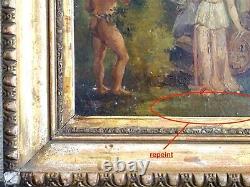 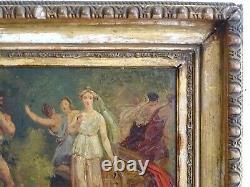 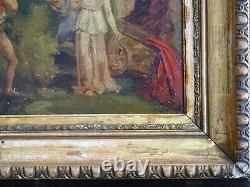 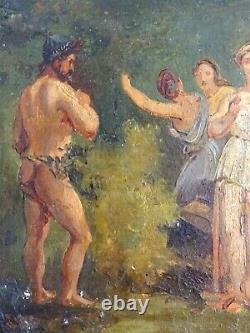 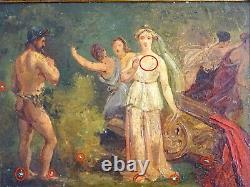 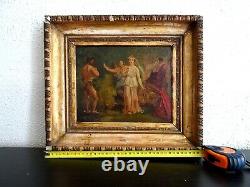 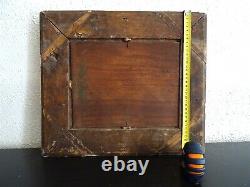 Charming romantic painting (oil on wooden panel), dating from the middle of xixe and without signature. It is a work representing a mythological scene that takes place in a forest. In the centre there is a woman dressed in a white dress and wearing a cap on which is hung a white veil.

Ready from it is a tank with a large red sheet. On the left, there is a naked man, wearing a helmet on his head, who only wears the branches of a tree that hides his crotch. His right arm is folded on his torso as if he were pointing at his finger in an interrogative air. Finally, in the background, there are four women fleeing. I'm not sure I was able to identify the scene or the protagonists, but it seems that the woman in the center is the aurora goddess (or eos), the goddess of dawn.

Aurore was condemned by aphrodite to fall in love only with humans. So he had many relationships with mortals such as orion or cephalus, but it might be that the man on the left was actually the Trojan prince, tithon, whom she took away and married. Aurore is often represented surrounded by nymphs. The four young frightened women could therefore be nymphs offended by the situation.

The board is not signed. It is clearly part of the movement of romantic painting and the artists who animated this pictorial movement. In some of his painted studies, we find the same vaporous appearance (especially on vegetation) and a sometimes broad but precise gesture for a small format.

In one of his studies of 1858, entitled "Saint-Sébastien with irene and a companion", which is found in the collection of the art museum of los angeles, there is a rather similar palette of colours, especially on the greens and the powerful red of the drape. Often the aim of gender studies was to prepare the composition of a larger picture. In order to be able to hope for an attribution, it might be wise to look for the same work in a larger format.. dimensions: - 27,5 cm / 22 cm. 42.5 cm / 37 cm (frame).

Note: I would like to point out that there are some very small gaps here (photo 10), which do not affect the quality of the work. Wood lamp analysis (black light) also shows that there are several repaints.

The two main ones are those present in photos 4 & 5, but it should be noted that there were several other small keys repainted. Some seem very old (probably by the hand the artist himself who could have done some retouchings) and others slightly less ancient. All this clearly removes nothing from the quality and beauty of this work. I'll be at your disposal if you have any questions. I'm able to understand english and to be understood.

So, if you have any questions you can contact me. Do not hesitate to visit and subscribe to my shop. The item "Charmante romantic painting xixe-étude d'aurore & sa char-l'esprit delacroix" has been on sale since Friday, July 23, 2021. It is in the category "art, antiques\art of xixe and before\paintings, enamels". The seller is "rbig07" and is located at/in alissas.